In Ludum Dare 43 some friends and I created a small game called Organic Harvest. You can play it right now! Let’s see how this highly praised game was made. 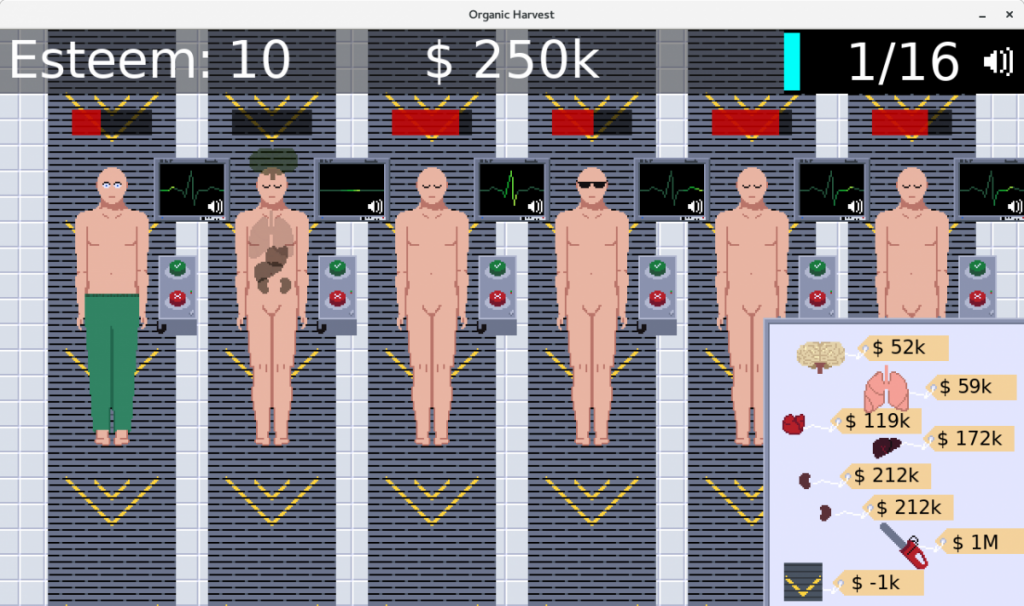 The game is about a surgeon who has to transplant organs. Unfortunately there are not enough organs so you have to decide how to use the available organs, who to save and who to sacrifice. Given the theme was „Sacrifices must be made“ this seemed quite fitting.

The first day of the jam, a Saturday, started with brain storming as always. We didn’t have many ideas, or even good ideas. Luckily a friend was more creative and he suggested the idea of having to transplant organs. As we did not have any better ideas so far and it seemed like this was going the best we chose to take it. After about one hour of brain storming we got to work and started implementing the game.

This time we used a game engine, specifically Godot. Compared to previous jams where we used more low level game frameworks such as libGDX or Löve this proved to speed up development a lot. While we had a lot of difficulties to fight which would not have occurred with the other ones it was still a lot faster. For example having an editor to visually place items is worth a lot. Also being able to animate everything is very nice. And not having to implement the UI elements yourself…

After the first day on Saturday evening we already had implemented most of the important things like the mini game pictured above to connect the newly implanted organs. Most of the art was done as well. This meant that we had almost the whole Sunday to polish the game and improve all those small annoyances.

On the second day we finished the remaining features such as the mini game to cut open the patients (see below), being able to buy upgrades and improvements to the art such as animated fire to burn the unlucky patients. We then started adding sounds and polishing everything. For example we added an ECG to show the „heart beat“ (never mind that it keeps going if the heart is missing). The sounds are synced to the visuals and both get faster if the heart rate increases. 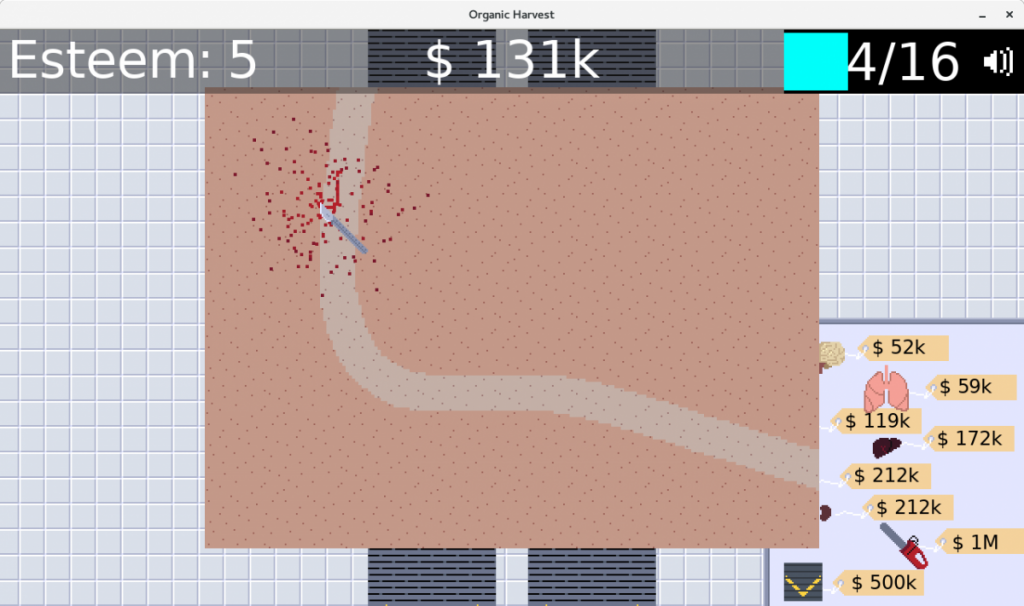 On Sunday evening we were done with the game. We even had a single background song! As we had to go to university again we considered this version of the game finished and were ready to upload. We also sent a demo version to the friend who suggested the idea to test it. He came back with a long list of stuff to improve… So we decided to use Monday evening to polish some more. We had to balance the cost of everything, the income of successful surgeries as well as the impact on the esteem and the speed of people arriving. And many small things such as improving the recognition of placing the blood vessels. It was early in the morning again once we were done. We now also had three more background songs. The game benefited a lot from this extra round of polishing. 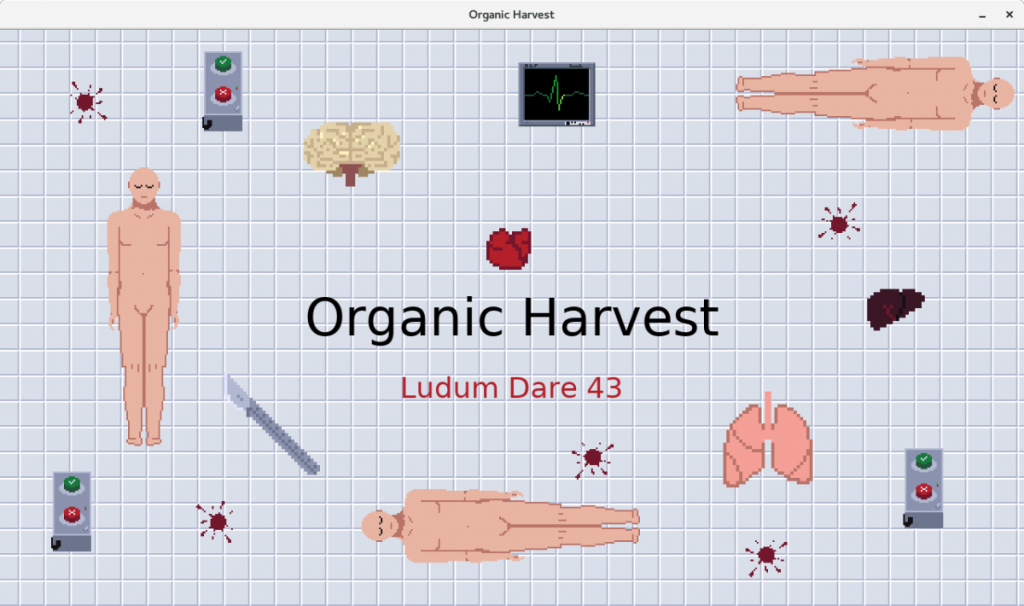 Things to do better next time 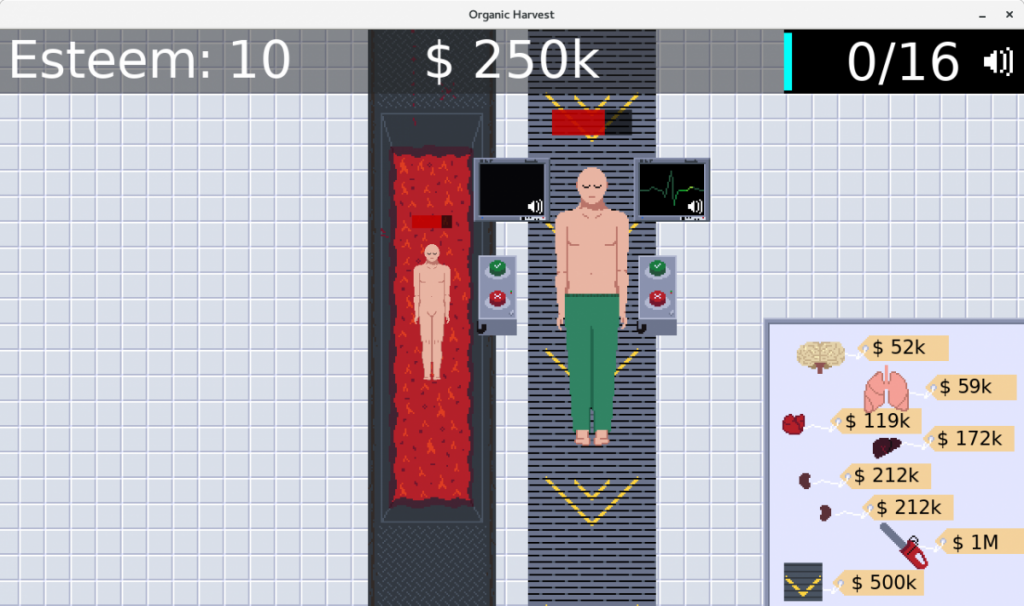 While we at first didn’t like the theme very much it turned out to be not that bad. We had a lot of time to polish the game and I think this shows. In the future I would like to create a bit a larger game again, but keeping the quality of this one. If you still have not played the game, you can do so now!